The Real box (not hollywood) - The Dybbuk box 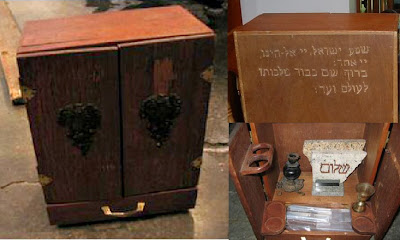 A dybbuk box, or dibbuk box, is a wine cabinet which is said to be haunted by a dybbuk. In Jewish folklore, a dybbuk is a restless, usually malicious, spirit believed to be able to haunt and even possess the living. The box achieved recognition after it was auctioned on eBay with an accompanying horror story and is the original inspiration for the 2012 film The Possession

Note that the film Possession is based on a real story to which wasnt made up for a Hollywood horror film, these true events happen to a few people that owned this box.


The term "Dybbuk Box" was first used by Kevin Mannis to describe the box in the item information for an eBay auction to describe it as the subject of an original story (not the story for the film) describing supposedly true events which he considered to be related to the box. Mannis, a writer and creative professional by trade, owned a small antiques and furniture refinishing business in Portland, Oregon at the time. According to Mannis' story, he purportedly bought the box at an estate sale in 2003. It had belonged to a German Holocaust survivor named Havela, who had escaped to Spain and purchased it there before her immigration to the United States. Havela's granddaughter told Mannis that the box had been bought in Spain after the Holocaust. Upon hearing that the box was a family heirloom, Mannis offered to give the box back to the family but the granddaughter insisted that he take it. "We don't want it." She said. She told him the box had been kept in her grandmother's sewing room and was never opened because a dybbuk was said to live inside it.


On opening the box, Mannis found that it contained two 1920s pennies, a lock of blonde hair bound with cord, a lock of black/brown hair bound with cord, a small statue engraved with the Hebrew word "Shalom", a small, golden wine goblet, one dried rose bud, and a single candle holder with four octopus-shaped legs; all items supposedly used in Jewish folklore to exorcise demons.


Numerous owners of the box have reported that strange phenomena accompany it. In his story, Mannis claimed he experienced a series of horrific nightmares shared with other people while they were in possession of the box or when they stayed at his home while he had it. His mother suffered a stroke on the same day he gave her the box as a birthday present — October 28. Every owner of the box has reported that smells of cat urine or jasmine flowers and nightmares involving an old hag accompany the box. Iosif Neitzke, a Missouri student at Truman State University in Kirksville, Missouri and the last person to auction the box on eBay, claimed that the box caused lights to burn out in his house and his hair to fall out. Jason Haxton, Director of the Museum of Osteopathic Medicine in Kirksville, Missouri, had been following Neitzke's blogs regarding the box and when he was ready to be rid of the box Neitzke sold it to Haxton. Haxton wrote The Dybbuk Box, and claimed that he subsequently developed strange health problems, including hives, coughing up blood, and "head-to-toe welts". Haxton consulted with Rabbis (Jewish religious leaders) to try to figure out a way to seal the dybbuk in the box again. Apparently successful, he took the freshly resealed box and hid it at a secret location, which he will not reveal.


Skeptic Chris French, head of the Anomalistic Psychology Research Unit at Goldsmiths' College, told an interviewer he believed that the box's owners were "already primed to be looking out for bad stuff. If you believe you have been cursed, then inevitably you explain the bad stuff that happens in terms of what you perceive to be the cause. Put it like this: I would be happy to own this object."

The Following is a statement from a owner of one of these dybbuk box's what your about to read is real it is not a joke or fictional by Hollywood film the possession, these boxes are real & are not to be opened at any cost, if you find one buried it or put it in concrete don't open it or destroy it :This is a eye witness account of what happen when  one owner open the box.


1. No, I am not religious.
2. No, I do not wish to have or participate in any sort of exorcism, or case study, or photo sessions at my home.


3. No, I will not sell any of the individual pieces which were originally found separate from the other pieces and the cabinet.
4. No, I do not speak Hebrew nor do I know what the word "keselim" means. I don't know that the word is even
or or a Hebrew word.

5. At the end of the auction, I have decided to take an opportunity to speak with the winning bidder for two reasons: a.)To make sure that the winning bidder is a serious adult who has employed some valid reasoning skills in making the decision to accept whatever this is. I will not be judgmental. Do whatever you want or need after the sale. b.)To offer full details of the events that have transpired. After I have carried out those responsibilities, and upon payment, I will have the cabinet and its contents delivered by U.S.MAIL, FED-EX, or UPS to the winning bidder. At that point, I will have no further involvement with the matter in any way, shape, or form. Period.